I had a most interesting conversation with gent that I work with not very long ago on the topic of “hippies” and the different perceptions that people develop that apply to the term “hippie”. 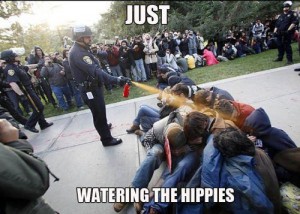 As most are aware, my Dad is the one that more or less labelled me “hippie” a number of years ago following a conversation on the evils of artificial ingredients in his chocolate almonds.

When given the choice, I make the decision to not consume artificial anything by way of foods, personal care products, cleaning products, etc. There are times when this issue can’t be avoided – such as, not everyone can afford organic Egyptian cotton sheets. Not everyone has access to hemp fiber sneakers or backpacks. This list gets rather long when actually put some thought into it.
But, what I found disturbing about this particular conversation was that this person (who is about 15 years my senior) was exceedingly proud of the fact that back in his day he and a group of his friends had rushed some “hippies”, dragged them into the lake and cut their hair while the local police stood by and watched.
I will grant that this particular era (circa 1970) was fraught with social upheaval and groups of people sitting on the beach singing Bob Dylan tunes to a beat up guitar, but my question here is what gave him (and his buddies) the RIGHT to jump these folks and do what they did?
Being at work at the time of this conversation, it was highly inappropriate to shout “you self-righteous ass!! what gave to the idea that what you did was acceptable?”. So, at the time, I didn’t really say much of anything.
In stewing in the conversation over the last few days, it has occurred to me that not only is this man from a different era but he is also a preacher of the christian faith.  I’m sure Jesus would be proud!

Maybe it’s just my middle aged mind thinking back to younger and wilder days, but really, I don’t honestly think so.  Sure, everyone has done stupid things in their youth.  We’re not always PROUD of the decisions we make or the outcome of these decisions, but in the end it’s all part of the learning curve.   I don’t ever recall being intentionally MEAN to someone else and thinking it was a good thing. 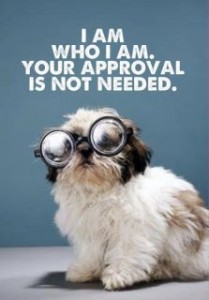 was PROUD of what they’d done.  He was amused by it.   He felt that he and his buddies had dragged these “hippies” out and cleaned them up.  Taught them a lesson, as it were.

To my rationale, this would make hypocrites out of them all.  To jump a group of people because they had long hair, drag them into the lake and cut their hair would be quite simply, assault.

There are far too many that believe themselves to be in the right and everyone else is wrong.  Sometimes they take forcing their beliefs on others to an extreme.

The way I see it – there is not enough individuality these days (and in years gone by).  School kids are taught that bowing to authority is necessary.  They are taught to not question what they are told, and if they do (which my kids did, and I got the phone calls from the school!) they are punished, or singled out, or shunned.

Creativity is not molded or encouraged, it’s directed into what the system believes is necessary to create good little workers.

How can this be fixed?  I have no clue.  Shall we all rage against the machine until it breaks?  Probably not a viable solution.  But what we can do, is our own thing.  We can teach our children to find their OWN way.  To understand that what they teach them in school is just the basics.  Readin’, writin’, ‘rithmetic.  Everything else, they will need to discover on their own.  We can encourage their curiosities and teach their minds to soar.  Help them find their own THING.  Be it writing, gardening, medicine…WHAT their thing IS, really doesn’t matter.  To have them grow up with a strong sense of self, self worth, and a driving wonder to make this world a better place IS what counts.

To have them grow up believing that you can force someone to “clean up” and see things way you do, isn’t what should be taught.  They shouldn’t be taught to just follow orders and do as they’re told.

They should be taught to think for themselves, on an individual level.  To rationalize in their OWN mind the difference between right and wrong.  To force someone to “clean up” is just wrong – regardless of how right you think you are.

Oh how it frustrates me.  After devoting much of my day to viewing YouTube videos on WordPress basics and how to add […]

One thought on “Just watering the hippies….”